by Zohaib Zahid 3 years ago5 months ago
105 shares

Veteran Pakistani actress, Naila Jaffery who is undergoing cancer treatment at a hospital in Karachi needs B+ blood.

Artist, writer, and motivational speaker, Muniba Mazari requested people to donate Naila Jaffery who is bravely fighting cancer which is at its last stage. 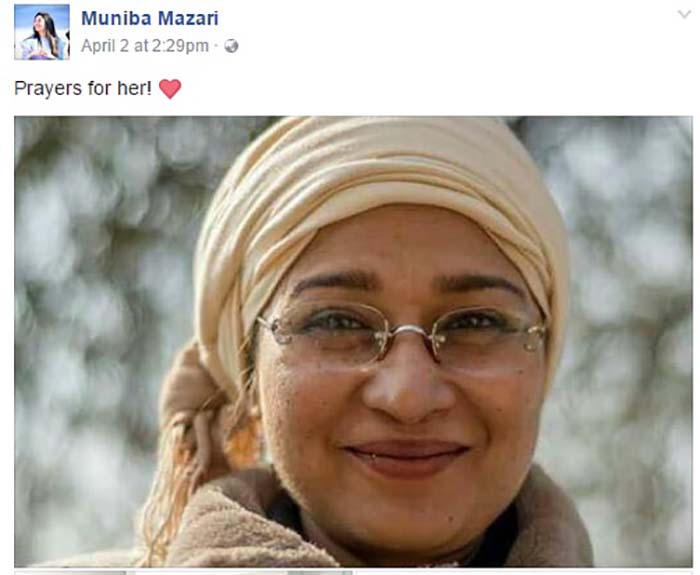 Naila Jaffery started her acting career in the 90s and maintained her position as mainstream actresses due to her versatile acting and unique roles she played in different dramas.

The actress also enjoys immense respect among the artist fraternity of the Pakistan due to her humble nature, despite passing through terrible circumstances, she always maintains a smile on her face.

Naila rarely makes any appearances on talk shows. Earlier, She spoke to Faisal Qureshi on his program via telephone and stressed upon the need to spread awareness among the public.

She also acknowledged the efforts of her friends, family, colleagues and other people who helped her and made her stand in the face of adversity with greater courage. She was narrating very bitter reality of her life, but her voice never shook, her confidence remained unshattered, depicting a sense of hope.

Her fellow colleagues and friends also extended their support to her and asked people tp pray for her health.

Please pray for my colleague & friend Naila Jaffery who is suffering from Cancer. May she Get well soon inshallah. Ameen pic.twitter.com/WGxgsyA64W

Even at the time of crises, she was quite able to look at the beautiful aspects of the life, which come through the mutual harmony of the people as they care for each other and never leave them in the times of need.