Through the lens of many photographers, we have seen that Pakistan has been blessed with immense beauty. From the ruins of old civilizations to the natural beauty of the northern areas and mountain ranges in the country, we can see the blend of many eras of the past with the amalgamation of various cultures over the years.

Among such places is Katas Raj, situated in Katas village near Choa Saidanshah in Chakwal district in North Punjab. This place is around 271.2 KM from Lahore and is famous for its attribution with Hindu gods.

It dates back to about 615-950 CE (Common Era) and is one of the most important Hindu pilgrimage sites in the country.

One of the hidden gems of Pakistan, Katas Raj offers a very diverse history and is often neglected when talking about the cultural heritage of the country. It is ignored so much that the sacred pool which is there right at the heart of the site for thousands of years is getting drained by the nearby cement factories. The issue is so grave that the Chief Justice of Pakistan has taken the notice. We will also publish those issues in detail in our other story, but here we would try to stick to the immense historical and cultural value of this site.

On our way to explore its history further, we embarked on the journey from Lahore via M2 Motorway in our own car.

We had all the essentials with us, a good mood, pleasant weather, lots of food and our photography partners – mobile phones and 70D Canon. To reach our desired destination we got off from the Motorway at Kallar Kahar Toll Plaza, where after taking a right turn, continued on the Choa Saidanshah road. Katas Raj is around 29KM from the Kallar Kahar toll plaza which takes about 30 minutes to reach by car.

During our journey, we were enchanted by Sajdagah of Hazrat Fareed-ud-Din Ganj Shakar, whose signboard pops up on the right side of the road.

To see the place one has to get off the main road into the tunnel and go right, and if you want to take in, some Punjabi feels, try doing it on foot.

Back on the main road, we were again mesmerized by another hidden gem, Sajdagah of Lal Shahbaz Qalandar, whose board also happens to pop up on the right side of the road.

This place was looked after by a single man who has spent 35 years of his life dedicated to keeping this place up and running. Lal Shahbaz Qalandar many years ago spent a brief period of his life here in meditation.

Again roaring towards our prime destination, we were hypnotized by the beauty and the serene environment of the route. The primary mode of transport for locals is a van/lorry, which only costs Rs. 100 to reach Katas Raj from Kallar Kahar Toll Plaza.

Reaching Choa Saidanshah Toll Plaza the first thing that you’ll see is the Mosque and then the old Hindu Temples on the right side (right side is the go-to place for all things important here) and yes that’s how you’ll know that you’ve reached your destination just like we did.

Also, if you’re relying on Google Maps to get you across, you might want to hold your horses as from the Kallar Kahar Toll Plaza, the 3G signals of Ufone goes away. Near Katas Raj one doesn’t even get a decent signal from Zong, Ufone, Warid, and Jazz, let alone a 3G/4G one.

Katas Raj for decades was in a bad state as it was neglected by the government until Lal Krishna Advani, India’s former Deputy Prime Minister visited the temples in 2005 where later a grant was approved for the restoration of this place. This place comes under the Evacuee Trust Property Board (ETPB), a board made by Government of Pakistan that looks after properties left by Hindu and Sikh evacuees.

The history of Katas Raj is thousands of years in the making. Considered as one of the Holy places for Hindus, its full name is Shri Katas Raj where Shri means sweet, and Katas means to tear or raining tear.

The temple complex is believed to date back to before the Mahabharata era, where according to one legend, at the death of Shiva’s wife, the Hindu deity’s tears created two ponds, one at Pushkara in Ajmer, India and the other in Katas Raj named Katash Kund. 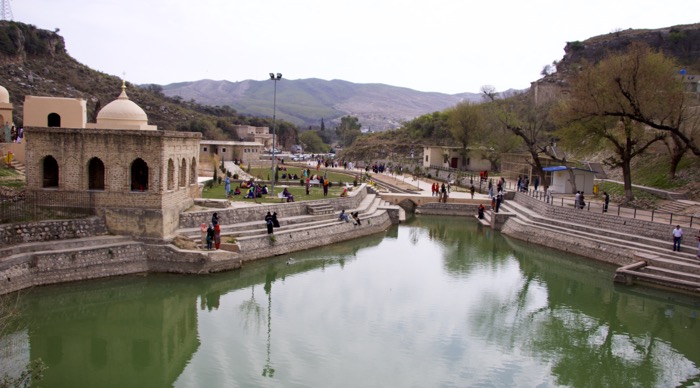 Entering the temple complex one can clearly see the pond and also building or pavilion with 12 doors known as Bara Dari, which throughout history has been designed to allow free flow of air. At Katas Raj, one cannot find an appointed guide as people assigned as security guards help people like us with the tour.

We asked one to show us the Temple complex, and thus we started our tour with the Shiv’s Temple, also known as the active Mandir where Hindus still come and worship their deity. There were also a few small temples that could be witnessed near the Shiv temple.

The temple complex also had a dedicated library for pundits where we witnessed the original artwork featuring various paintings of Hindu gods which are believed to be as old as the temples. We could also see the reminiscence of the Mughal era, as many of the stones and paintings resembled the one that can be found in Shahi Qila (Lahore Fort). 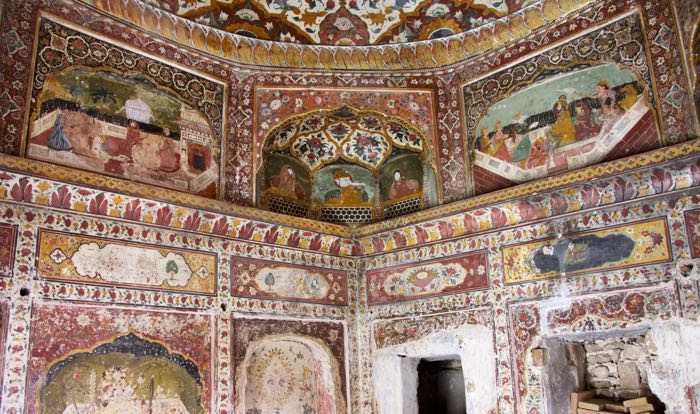 Going left, we reached the residence of the pundits, which was restored later in 2006 after the complex was attacked in reaction to Babri Masjid’s demolition. The Mahogany wood from Jammu Kashmir was used for the stabilizing the ceiling, and many of the artwork seems to be repainted as well. 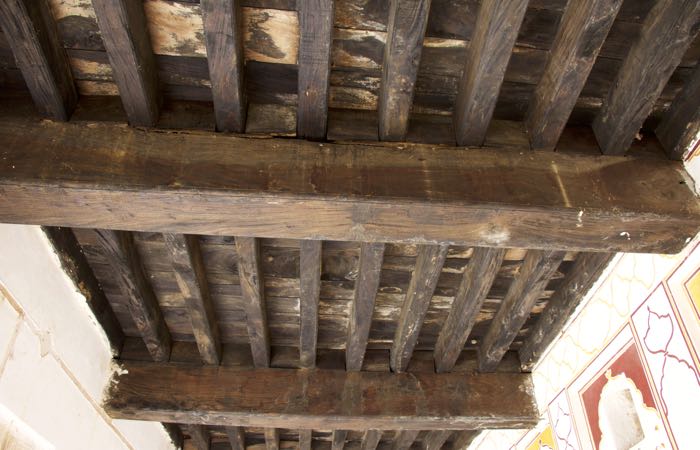 Looking at the structural and architectural beauty of that time, we ended up next at a tunnel which used to direct the water coming from the mountains to the pond. Still today, after heavy rainfall, the water travels from the mountains/hills to the lake. Standing there we could also see Hindu samadhi, where three of them were in plain sight, and whereas the two of them were inside the Sir Syed School, which was built on Hindu property leased to the government.

Temple of Ramchandra, a double stories structure, was situated in the east of the Hari Sigh Haveli, a building which was being converted into a Museum. Sri Ramchandra in Hindu mythology is the seventh avatar of God Vishnu, where Ram means God and Chandra mean Moon. 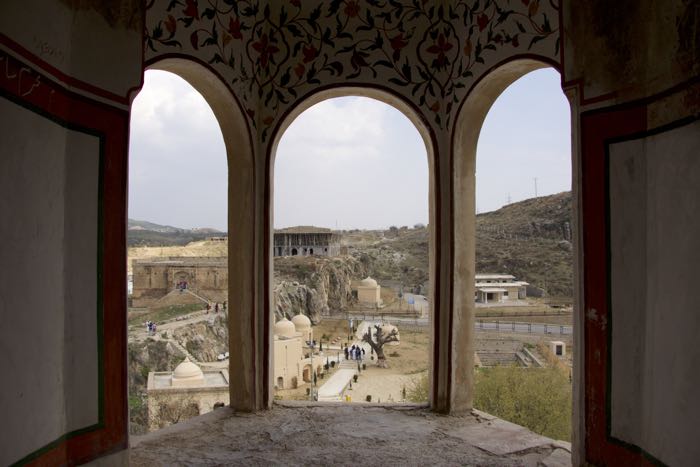 Looking at Ram’s Temple, One could see that it was renovated in the Mughal era, where Akbar, the Mughal King, supposedly ordered the front of the temple. On the left side of the pillar, one can witness the Hindu idols engraved into the pillar, which was also done later in the Mughal reign. Ramachandra’s temple has seven rooms where a single dedicated room at the top was the actual temple. Also, there was a basement in the temple that has been closed off which legend has it the Hindu Devis (goddess) used to reach the pond. 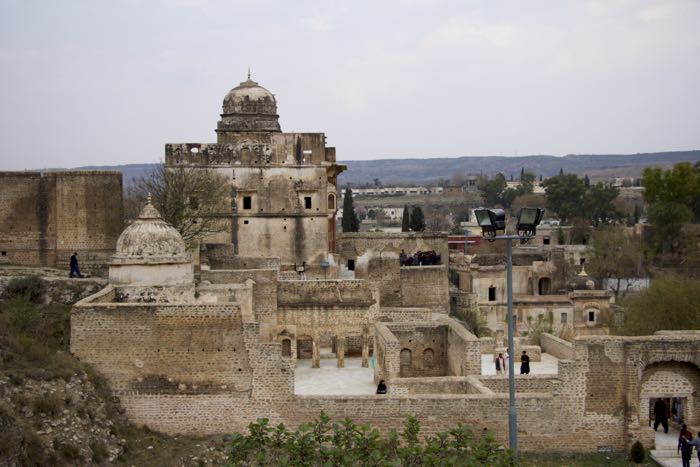 Hanuman’s temple was a rectangular enclosure where various paintings that believed to be 2400 years old were now restored to a certain extent. The Hindu worshippers bring along the idol of Hanuman with them, place it in the temple, and offer their prayers. There were also remains of a Haveli (Snake Haveli) by Shiva, where he meditated for many years. After the attack on Babri Masjid in India, it was also harmed by the people, where only a few signs are left of its existence.

On our way to Sat Ghara temples (which requires climbing quite a few stairs), we witnessed the remains of Stupa, most of which have been exposed due to recent diggings. Ashoka made the Stupa, and still, many Buddhists come here to pay their respects at the site.

Going towards the west of the Stupa, we reached Sat Ghara (seven temples), where three of them fell in the past, and four still stands today. According to some legends, the foundations for this place is around 7500 years old where some argue that its 5500 years old. The construction of Sat Ghara was endorsed by the five Pandavas brothers who were in exile.

Before entering the Katas Raj temple complex, one can see various caves on the other side of the roads which served as the residential areas of the five brothers. One thing should be kept in mind here; if anyone is thinking about visiting these caves, they should remember to keep a flashlight with them.

Tired after a day well spent, tourists can also hold an epic BBQ session, where outside the Youth Hostel, one can experiment with their kitchen skills. Clean drinking water is also available there in the form of a water cooler, but one should carry a water bottle with them while beginning their tour as one would really feel thirst after an hour or two (especially in Summers).

Katas Raj is one of the hidden gems in Pakistan that houses the history of not just one but many cultures and religions. The remains of Al-Bruni’s University, a Muslim scholar, Hindu temples, Haveli Hari Singh and Stupa for Buddhists show the diversity-rich history of this place, which makes you wonder what else the wonderful land of Pakistan is hiding? 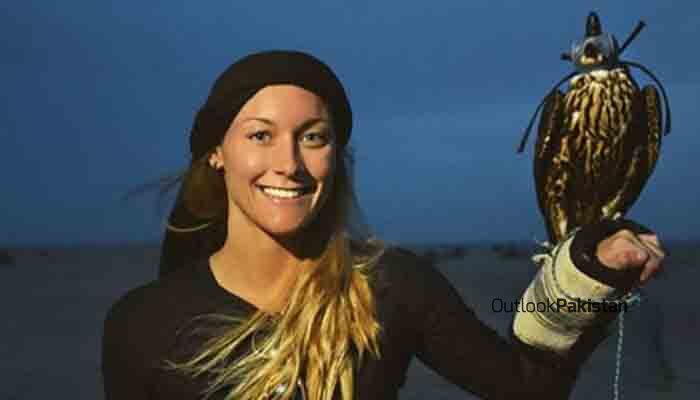